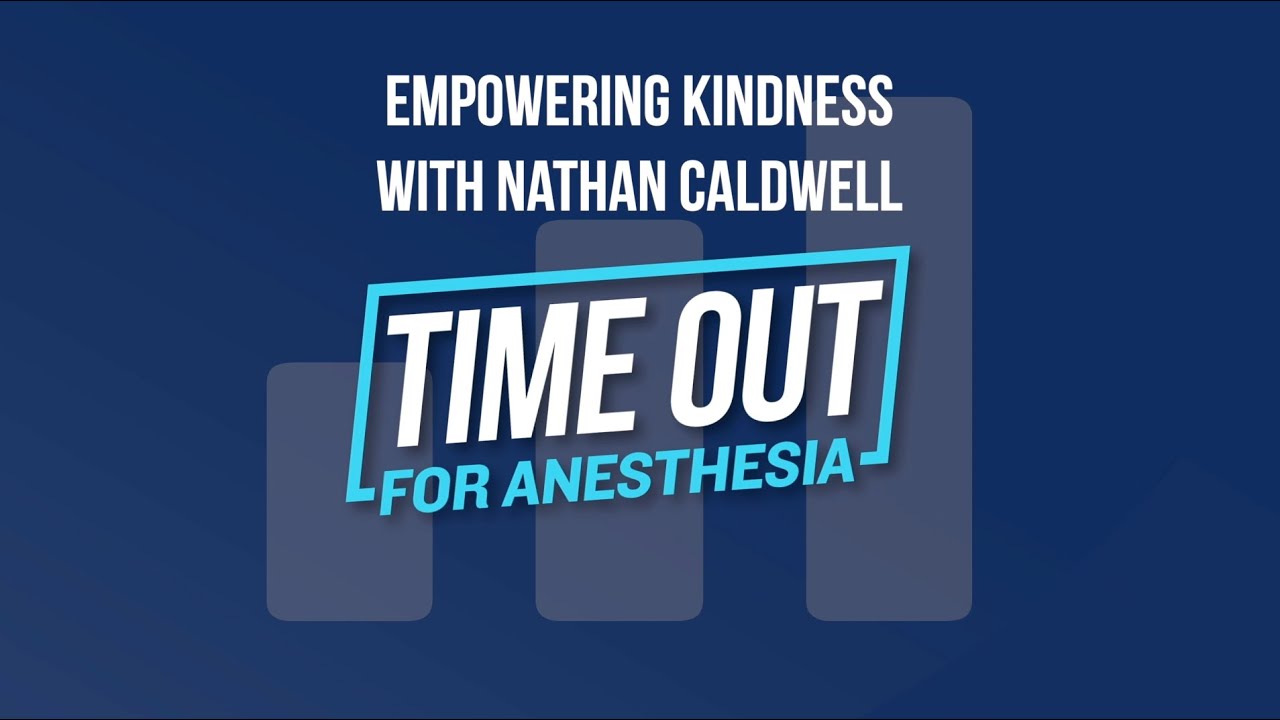 This article was developed from an episode of “Time Out For Anesthesia” with Nathan Caldwell, Amazon Best-Selling Author of Empowering Kindness: Why Unlocking Power In Others Will Be Your Greatest Success. You can watch or listen to the original interview via the links at the bottom of this page, and you can visit his website at www.EmpoweringKindness.com.

The message didn’t necessarily begin with Nathan Caldwell—this truth has been around forever. Nathan’s role is to share it with others and to help people focus on it and see the importance of what is typically taken for granted. But it requires intentionality, and it requires people crafting their character, which is an often higher-than-anticipated call to action. Empowering kindness—inserting kindness into and keeping it at the top of your priority list throughout everything you do as a company (really as just a human being)—is more critical to any company’s wellbeing than usually believed. And the effort to keep kindness as a cornerstone of company thought and behavior is unending–often forgotten in the mindset of competing priorities.

The first step toward positive change is to level-set on the definition of kindness. After all, most people have different definitions of what it is, with many even subscribing to the idea that kindness is weakness. We would argue that kindness is a strength.

As an example, Caldwell cites the story of Wayne Gretzky— one of the greatest hockey players of all time. Across their careers, hockey players accumulate ranking points by scoring goals or making assists. Gretzky is the all-time leading points leader with 2,857 points. But here’s what’s even more interesting: If you take away all of the 894 goals from his overall points, he still has 1,963 points from assists—still 42 points higher than 2nd position’s Jagomir Jagr’s cumulative points. If you dig a little deeper, you can find a secret to success in Gretzky’s hockey stick. The blade on his stick has almost no curve. Most players enjoy a curve on the blade, because it enables a much faster shot on goal. But Wayne Gretzky wasn’t simply concerned about racking up as many goals as he good. He realizes that if he can set up his teammates for success, they have a greater chance of winning as a team, and so he used a stick blade that allowed him to pass just as well on the forehand as he does on the backhand.

That is completely different from the mindset of most superstars in any sport, which is, “How can I score the most? How can I be put on a pedestal more?” Such a powerful message comes from the idea of “I want to be an amazing passer. I want to set my teammates up for success.” Does that mindset make a player weak? No! Gretzky is still one of the all-time leading goal-scorers, as well!

We’ve also spoken recently to another executive, Seychelle Van Poole of the Van Poole Properties Group, who holds a very similar mindset to Gretzky. Her organization is currently losing a key player because, while working with the group, he’s discovered a different passion along a completely different career path—really a dream come true for him. A tendency for any organization is to see that movement and get disappointed, get upset, try and draw that person back or even get angry with him for contributing to attrition. Van Poole, however, has a refreshing perspective: for her and her organization, this is a success. She holds that her company’s role toward its employees is to create opportunities for success. Not just for the organization—for the employees themselves. If that success is found as part of the team, that’s fantastic. But if working for their company can lead to fulfillment and joy in other places, Van Poole considers the company just as successful. While many may not have added the same tools to their own leadership, does this make the organization weak? On the contrary, the Van Poole Properties Group continues to grow and its team continues to thrive.

Central to the themes of Empowering Kindness is the outstanding example of Dolly Parton, a hero of Caldwell’s. Known for her “Dollyisms” and a backwoods wisdom with a boardroom style, she knows how to run business. Caldwell quotes from her song, 9 to 5:

Parton describes an all-too-common poisonous work environment where you want to grow, you want to have opportunity, but those above you won’t let you. They’ll step over you. Empowering Kindness points to research that has demonstrated that, in that sort of toxic environment, heart disease is more than twice as likely. In that study, the environment is defined as one with low job control, where you face problems every single day for which you would like to contribute solutions, but are consistently turned away or ignored. Employees in that situation feel stuck in a spot where they have low control over what happens to them, how they provide service, how they do their job.

Even without the research, most people have been part of a situation where they felt like their voices weren’t being heard or in working circumstances where they felt little to no opportunity for actual, meaningful contribution. Those readers will immediately recall the frustration and anxiety and even the physiological effects that came along with it.

In recent news, Dolly Parton bowed out of a nomination to be considered for induction into the Rock & Roll Hall of Fame. Among other nominees were names such as Pat Benatar, Duran Duran, Devo, Judas Priest, Rage Against The Machine, Carly Simon, Dionne Warwick, and others that really do comprise a fantastic list of musical influencers. Part of Dolly’s tweet read:

“Even though I am extremely flattered and grateful to be nominated for the Rock & Roll Hall of Fame, I don’t feel that I have earned that right. I really do not want votes to be split because of me, so I must respectfully bow out.”

While many would likely disagree with her on whether she has earned the honor, all can agree on the impressive degree of humility required to bow out of such an illustrious honor for the sake of others.

And while we may pay respect to her current humility, the same personality has, throughout Dolly Parton’s career, garnered questions about whether she ought to be taken seriously. One of the greatest examples might be a 1970s interview by Barbara Walters, where Dolly is asked, “Where I come from, would I have called you a ‘hillbilly?’” The question didn’t sound nor was it intended to be nice. But the way Dolly responds is beautiful. She plainly recognizes how some people, from Walters’s point of view, might say such a thing. But in actuality, Dolly’s people were a very proud people, a very intelligent people. They may not have the college degrees that many of Barbara’s people have, but they have class and wisdom—and they take care of one another.

And this would certainly not be the only time Dolly was criticized or mocked, but you would be hard-pressed to ever find a moment where Dolly Parton lashed out at anybody. She just says things like, “You know, they’re doing their job,” and “Well, they need to sell newspapers.”

But has kindness made her weak? If her outright success isn’t testimony enough, then perhaps a lesser known fact will clear it up. One of Dolly’s biggest hits is the song that she originally wrote and recorded: “I Will Always Love You.” The song had a lot of life and energy behind it; so much so that Elvis Presley, himself, approached her with a request to record it—he even famously sang it in some of his concerts. But his request came with a condition: he wanted not only to record it, but to own the rights to it. And she said, basically, “Thank you, but no, thank you. I’m not giving up my rights.” She was so business-minded and wise that she held on to it and, like you might know, eventually gave it to Whitney Houston, who brought the song a whole new life.

Kindness and strength are not opposing forces. Rather, they quite compliment one another in a partnership that propels some of the greatest and most successful leaders of our time.

There was a game where everything was on the line for this game, and Scottie Pippen, he was supposed to go in on the next shift. And he sat down on the bench and said, in essence, “If I don’t take the shot, I’m not doing it. I’m not going in.” You would never call a team “good” if players around it choose to sit out at significant moments balking at the idea of not receiving the most notoriety.

But for whatever reason, some people think that’s acceptable thought & behavior in the work environment. This comes down to the leaders, because they’re the ones who set the tone. Leaders are able to witness unkind behavior, pull people aside and say, “Tthis is unacceptable. We want a team where people can trust one another. We want a team where people are going to look out for and help one another.”

Check out Empowering Kindness for yourself: Your Demo!
Schedule a custom demo for your anesthesia group
Schedule Your Demo